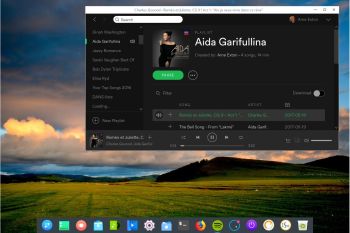 NEWS about ArchEX 181114
A new version of ArchEX is ready! In this new version, which I call ArchEX 2019, I have added the Deepin 15.8 (latest) Desktop environment. Deepin (made in China!) is devoted to providing a beautiful, easy to use, safe and reliable system for global users. I came to like Deepin very much when I installed it in ExTiX 18.8. So I thought why not install Deepin also in ArchEX?

WHAT IS ArchEX?
ArchEX 64 bit is a new (181114) Linux live DVD based on Arch Linux. Arch motto is KISS (Keep It Simple Stupid). ArchEX uses kernel 4.18.16-1-ARCH, Deepin 15.8 and LXQt 0.13 Desktop environments. Deepin 15.8 Desktop (made in China!) is devoted to providing a beautiful, easy to use, safe and reliable system for global users. About LXQt: LXQt is a lightweight Qt desktop environment. It will not get in your way. It will not hang or slow down your system. It is focused on being a classic desktop with a modern look and feel.

INSTALLED SOFTWARE
Among many other programs, Firefox 63.0.1 (for Netflix), Gimp, Spotify, GCC, Wicd and GParted – study this package LIST.

Program Management in Arch Linux
Arch Linux uses a proprietary system called Pacman. It is similar to that found in CRUX Linux. Read about Pacman.
You can also read all the documentation on Arch Linux. Four commands are basically the only ones you need to use:
1) pacman -Sy (update the packages database)
2) pacman -Syu (upgrading the whole system)
3) pacman -S MyUsefulProgram (the package installation command)
5) pacman -S –overwrite MyUsefulProgram (in case you get an error about “conflicting packages”)
Very simple!
Note: You can also use Yaourt – see below.

Yaourt – Yet AnOther User Repository Tool
If you want to install certain special packages for example Google Chrome and Spotify you can/must install Yaourt. Study this tutorial about how to install and use Yaourt – a Pacman frontend. Note: Yaourt and Spotify are pre-installed in ArchEX Build 181114. If you want to install new packages through Yaourt you’ll have to run the command su exton before yaourt MyNeededProgram. If you’re not logged in as the ordinary user exton. (You can’t run Yaourt as root).

DOWNLOAD
This version of ArchEX has been replaced by version 190612.

Read about my Android-x86 Systems – Pie, Oreo, Nougat, Marshmallow, Lollipop and KitKat at andex.exton.net – latest is AndEX Pie 9.0 (without GAPPS) and AndEX Oreo 8.1 (with GAPPS)!

and about my Pie, Oreo, Nougat, Marshmallow and Lollipop versions for Raspberry Pi 3/2 at
raspex.exton.se – latest is RaspAnd Pie 9.0 (without GAPPS) and RaspAnd Oreo 8.1 (with GAPPS)!