NEWS about ArchEX 200930
A new version of ArchEX is ready! In this new version, which I call ArchEX 2020, I have added the Deepin 20 BETA (latest) Desktop environment. Deepin (made in China!) is devoted to providing a beautiful, easy to use, safe and reliable system for global users. I came to like Deepin very much when I installed it in ExTiX 20.5. So I thought why not install Deepin also in ArchEX?

REPLACEMENT
This version (200930) of ArchEX replaces version 200914, which couldn’t run on UEFI computers. I’ve also replaced Yaourt with Yay – Yet Another Yogurt – An AUR Helper Written in Go. I came to know that Yaourt is dead. I.e. Yaourt is not being developed anymore. So in the new version of ArchEX I have fixed the UEFI matter, upgraded all included packages, installed a new kernel (5.8.12 – latest stable kernel by 200930) and replaced Yaourt with Yay.

NEWS 200930 about Calamares Installer
I’ve finally managed to make Calamares 3.2.17-3 (The universal installer framework) work without big problems/issues. Calamares 3.2.17 is quite new. Released November 28, 2019. This version gives you more control over the installation process. Now you can use Calamares to install ArchEX in any language.

WHAT IS ArchEX?
ArchEX 64 bit is a new (200930) Linux live DVD based on Arch Linux. Arch motto is KISS (Keep It Simple Stupid). ArchEX uses kernel 5.8.12-arch1-1, Deepin 20 BETA and LXQt 0.15.0 Desktop environments. Deepin 15.11 Desktop (made in China!) is devoted to providing a beautiful, easy to use, safe and reliable system for global users. About LXQt 0.15.0: LXQt is a lightweight Qt desktop environment. It will not get in your way. It will not hang or slow down your system. It is focused on being a classic desktop with a modern look and feel.

INSTALLED SOFTWARE
Among many other programs, Firefox (for Netflix), Gimp, Spotify, GCC, Wicd and GParted – study this package LIST.

Wireless connections
Use NetworkManager. You’ll find the nm-applet to the right in the panel. If your Network isn’t shown it is “hidden”. Then connect to a hidden Network. Just give NetworkManager your SSID and connect. Watch this screenshot.

IMPORTANT: About how to increase cowspace (Copy on Write) while running ArchEX live (from DVD or USB)
If you want to install a program or upgrade the whole ArchEX system while running ArchEX LIVE you may get an error message saying that the system is “out of space“. Then run the following command:
sudo mount -o remount,size=2G /run/archiso/cowspace
You can set the size to 3G, 4G or even higher if you have plenty of RAM, but 2G is normally enough. You can check how much of the cowspace you have left with the command df. Watch this screenshot.
NOTE: If you have downloaded the ArchEX ISO after 201002 you will notice that I have already increased the cowspace from 1GB to 2GB. If you need more you can use the command above.

Install ArchEX to a USB Pen Drive without persistence
Can be done with the dd-command in Linux. Please read this instruction. In Windows you should use Rufus 3.11 – see below. 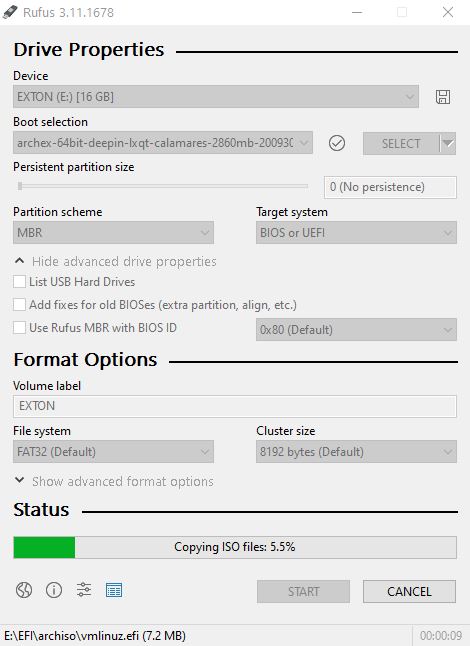 Program Management in Arch Linux
Arch Linux uses a proprietary system called Pacman. It is similar to that found in CRUX Linux. Read about Pacman.
You can also read all the documentation on Arch Linux. Four commands are basically the only ones you need to use:
1) pacman -Sy (update the packages database)
2) pacman -Syu (upgrading the whole system)
3) pacman -S MyUsefulProgram (the package installation command)
5) pacman -S –overwrite MyUsefulProgram (in case you get an error about “conflicting packages”)
Very simple!
Note: You can also use Yay – see below.

Yay – Yet Another Yogurt – An AUR Helper
If you want to install certain special packages for example Google Chrome and Spotify you can/must install Yay. Study this tutorial about how to install and use Yay – Yet Another Yogurt – An AUR Helper Written in Go. Note: Yay and Spotify are pre-installed in ArchEX Build 200930. If you want to install new packages through Yay you’ll have to run the command su exton before yay -S MyNeededProgram. If you’re not logged in as the ordinary user exton. (You can’t run Yay as root).

UEFI/non-UEFI computers
ArchEX Build 200930 is now also for UEFI computers. I.e. before you can run ArchEX live you don’t have to go into BIOS and change Boot Mode to Legacy Support.

DOWNLOAD
This version of ArchEX has been replaced by version 210305…